It all started down the pub...

It all started when the British Ecological Society (BES) announced that it was looking for public engagement and outreach activities to celebrate it's centenary in 2013. I had just been to a workshop where I heard about 'Einstein at Glastonbury' from 2005. I thought going to Glastonbury with a load of crazy ideas was possibly the coolest way you could engage the public with science - especially because doing hands-on science in the Glasto mud is possibly the best place to dispense with the image of the aloof white-coated brainiac in an ivory tower... So, next time I was down the pub and had had a couple of pints, I announced that I wanted to take the BES to Glastonbury to celebrate the Society's 100th birthday.

And it all developed from there. By the end of the evening, we had two pages of notes, ideas, and a title for the stall 'Sex and Bugs and Rock n Roll'. The team of roadies has also grown and we even have a member of the original 'Einstein' team on board.
Over the last few months we've been brainstorming and collecting ideas for activities, designing the stall (see Matt's excellent layout sketch below) and applying for funding.

And today we took the plunge and put in our application for a stall at Glastonbury in 2013! 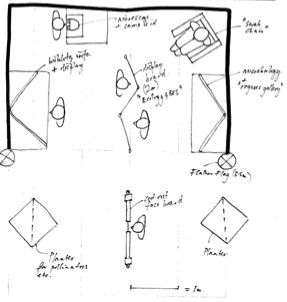 How gross is your festival kit?